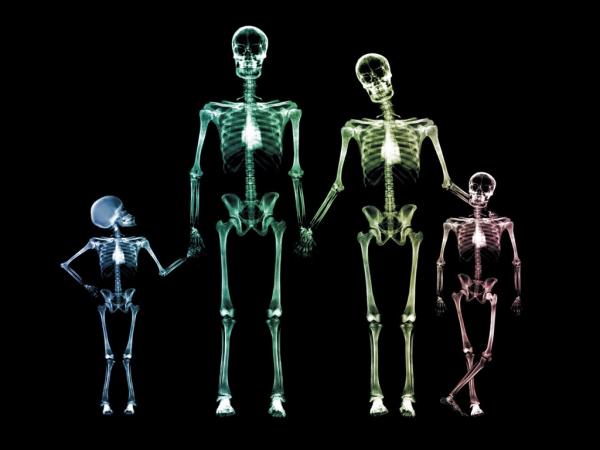 Radiation is one of the scariest things in the world. While it won't usually make you glow in the dark, it could cause a bunch of awful things to happen to your body.

Many patients try to wiggle their way out of their dentist appointments because they're worried about the radiation their dental x-rays might expose them to.

The good news is that very low levels of radiation aren't hazardous. Dental x-rays expose you to less radiation than some activities you perform each day. In nitty-gritty technical terms, standard set of 4 dental xrays for a routine check-up adds up to .005 mSev of radiation. An average day in the life of your average “Joe the Plumber” exposes you to almost .010 mSev of radiation from background sources, AKA the stuff around us.

So let's take a look at 10 harmless and ordinary common activities that expose you to more radiation than dental x-rays.

Radiation exists naturally in the environment. It's a by-product of certain chemicals breaking down. It permeates the soil that water flows over.

Man-made sources are regulated by the Environmental Protection Agency. The allowed levels of radiation are equal to the amount of radiation an entire city absorbs each year.

You drink this water and absorb tiny amounts of radiation. This can expose you to more radiation than some of the more advanced x-ray techniques your dentist uses.

Uranium deposits occur naturally deep within the Earth. These heavier materials decay into other elements, which include radioactive radon gas.

This gas then escapes upwards through the soil to permeate the air we breathe and the water we drink. It's even in the soil we use to grow food.

Breathing radon gas is considerably more dangerous than anything else listed here, but it is an unavoidable part of living.

3. Cooking on the Stove

Natural gas is one of the leading sources of energy. It's especially convenient for cooking on an open stove range.

The problem is that gasses like radon and other radioactive components tend to exist in it. You'll breath in radioactive materials when you cook and consume food that was cooked on a natural gas stovetop.

Cell phones, fluorescent lamps, microwaves and computers all emit small amounts of radiation. The radiation is a by-product of screens, the processes the allow products to cook, wireless signals and countless other things.

These levels are so low that they pose no known risk to you or your health.

You'll still receive more radiation from these sources than you will from x-rays at your dentist's office, which is true even if you see your dentist several times a year.

Simply walking outside exposes you to minute levels of radiation. This radiation is known as background radiation, and it's a naturally occurring effect.

The radiation can come from the soil, the air or the rain. It tends to come primarily from the sun, which is a small price to pay to enjoy the warmth that keeps our planet nice and toasty.

The unfortunate news is that you'll still get more radiation enjoying the outdoors than you will in the dentist's office. Neither source will cause you to glow in the dark.

For example, a CT scan of your chest will expose you to about 4 mSv of radiation each time you have one taken.

One bitewing x-ray will expose you to just 0.002 mSv of radiation.

As expressed earlier, radiation loves to reside within soil. This includes the nutrients that plants absorb while they grow, which is how radiation travels from the dirt to your food.

Even if you don't eat vegetables, your food involves them in some way. Even organic food has minute levels of radiation.

You'll acquire significantly more radiation when you eat food than when you have x-rays taken at the dentist's office.

Cosmic radiation comes from the rest of the universe. The stars (including our sun), planets, asteroids and even black holes emit varying levels of radiation.

While the Earth's ozone blocks a significant amount of this radiation, it does its best when you're near sea level. Flying in planes puts you in parts of the atmosphere that are less shielded, which means that you'll see more radiation while flying.

Because of the way radioactive particles travel, our bodies naturally absorb them. We then become carriers for this radiation.

When we talk to other people or interact with them, we expose others to this radiation.

Even hugging can be a source of radiation, but neither it nor your dentist's x-rays have enough radiation to harm anyone.

Dirt is one carrier for radiation. Trees grow in soil. Wood is made from trees. Paper originates from wood. Words are printed on paper, then bound together to form books.

When you open that lovely novel to curl up with as a bedtime activity, you're exposing yourself to radiation.

You'll expose yourself to enough radiation while reading to make the radiation your dentist uses in x-rays look as insignificant as a few drops in a glass of water.

Radiation from Dental X-Rays Won't Give You Superpowers

The thing that all these activities, including dental x-rays, have in common is that they all expose you to very low levels of radiation. It's unlikely that they'll get you sick, make you grow a third arm, or give you superpowers.

What they can do is to make your life better. Dental x-rays are especially helpful, as they help your dentist diagnose your mouth for treatment. Detailed diagnosis of oral problems before restorative work leads to a happy, healthy mouth with a beautiful smile.

**At Tatum Pediatric Dentistry, we follow the radiographic guidelines for minimal exposure that the ADA established in collaboration with the FDA.